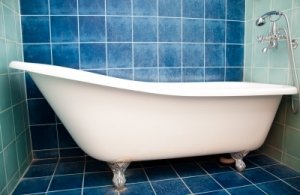 A grandmother was scalded to death at a luxury Bournemouth hotel, after staff increased the hot tap temperature, to limit the risk of Legionnaires’ disease. The grandmother, aged 86, was scalded to death when she took a bath when staying at the hotel in Bournemouth.
The pensioner suffered extensive burns to her lower limbs and scalding to her back and arms, the inquest was told. She had immersed herself in temperatures of more than 50°C suffering third degree burns to half her body and died in her en-suite bathroom.
Hot water had been heated in the hotel’s boiler to a temperature of 60°C and came out of the hot tap at around 50°C the hotel said. This high temperature was in order to reduce the chance of spreading Legionnaires’ disease by controlling Legionella bacteria.
An Environmental Health Officer recorded temperatures of 53.6°C and 61.5°C running from the bath’s hot tap. The hearing was also told that there wasn’t a warning sign stating: “Caution, water may run very hot immediately”, posted in the bathroom.
Pat McDonald from HBE explains, “If your organisation has consistent legionella positives and the bacteria are proving to be chemical resistant, then increased water temperature is a natural option for you to choose. However legislation then requires you to install TMVs to prevent the scald risk in public areas, which could have prevented this tragedy.
An alternative solution which is growing in popularity is Copper-Silver ionisation. Here the copper and silver elements cleanse the water which allows organisations to reduce hot water temperatures to around 45C, saving both energy and the need to install TMV’s.”